A scattered north Herefordshire rural parish in an area of outstanding natural beauty 500-600 feet above sea level.   Together with Pudleston village the hamlets of Whyle and Brockmanton make up the parish of Pudleston.

The village is mentioned in the Domesday Book of 1086

in the Hundred of Wolphy

including the Old English version

Even today the name Pudleston has variations including

Pudleston-cum-Whyle (the legal name of the parish). 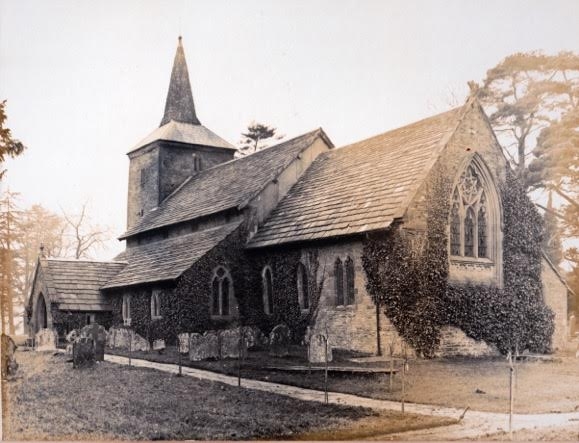 Standing at the centre of the parish, St. Peter’s Church is considered to have been built around the 12th century in the Norman and Early English styles. Built from stone with walls of local sand-stone rubble, it has a stone-slated roof and a stumpy shingled spire.

The oldest part of the Church is the West Tower which, together with the spire, was restored in 1892 following earlier restoration and building work to the Church. It is reputed that Pugin designed the stained glass windows in the north and south aisles (which were built in the mid 19th century) for Mr Chadwick of Pudleston Court.

The belfry houses four bells; two inscribed with dates from the 17th century whilst the other two (one of which came from Whyle Chapel) are thought to be from the 15th century.

The west end of the church overlooks ‘Adam & Eve’, two of the oldest oak trees in the county.

In 1873 one acre of Tanhouse Meadows was purchased for £56 by Septimus Godson (the chief landowner in Brockmanton) and by the Rector and Churchwardens of St. Peter’s Church ‘for the education of poor persons in the parish of Pudleston in the principles of the Church of England’.

A year later a small school was built with large perpendicular windows facing eastwards towards The Rectory. The school Log Book of 1904 (the earliest existing record) states there were 51 pupils attending the school which was run by a headmistress helped by an assistant.

The school closed in July 1982, 108 years after it was built.  By that time there were 19 pupils attending and each one was given a leaving gift of a silver-plated goblet filled with sweets.

It was noted in the final entry of the school Log Book that the villagers ‘would love to know what will happen to the school in the future’. It has been converted into the thriving village hall.

There also used to be a shop and post office in the parish (both closed in 1977) together with a blacksmith and a wheelwright. These have all been converted into private residences.

The “Hill where docks grow” is a main road hamlet along and around the the A.44 Leominster to Bromyard road.        Docklow Church was originally, along with Stoke Prior,  chapels of ease for the church at Leominster.  In payment for conducting services at these chapels, the Vicar of Leominster received payment in the form  of Trug corn(a trug being a 12th of a one horse-drawn load) When the Chapels became one in roughly 1650 the Trug corn was paid to the new vicar.  Docklow Church was mostly rebuilt in the late 19th century, although the tower is original.                             There is still evidence of cuttings from the  dismantled railway which ran from Bromyard to Leominster.

Derives it’s name from hamm-tun meaning “settlement in a meadow” and Wafre, probably from Simon le Wafre. In old french Wafre means  “wafer” but it could be a corruption of wafrer or “wayfarer”

How we protect your data
Accessibility Statement

You live locally? Want to know what’s going on? Subscribe and get updates. — Its FREE